Iranian state media announced last week that its Guardian Council constitutional body has approved new AML/CTF measures passed by the nation’s parliament, according to a Reuters report. If the measures are fully implemented, they will bring Iran more in line with global standards to prevent money laundering and terror financing.

The global Financial Action Task Force (FATF) has been urging Iran to pass laws to improve its AML/CTF requirements in order to be removed from the FATF blacklist. Removal from the blacklist would make Iran safer and more appealing for international investors. Regaining access to global markets and the international financial system has been central to Iran’s foreign policy in recent years, but the situation has grown even more complicated by the Trump Administration’s re-imposing of sanctions related to Iran’s nuclear program.

Last week’s move to approve more globally-aligned norms for AML/CTF likely angered hard-liners in the government, but others perceive urgency related to dealing with the investment-stifling blacklisting. In June of 2018, FATF issued a statement expressing its disappointment with the lack of progress toward meeting international standards for AML/CTF, but it extended Iran’s deadline for implementation of improvements to October of 2018.

Reuters reported that earlier in June, Iran’s Supreme Leader Ayatollah Ali Khamenei urged the country’s lawmakers to implement AML/CTF controls in line with the nation’s own interests, rather than FATF’s. Khamenei’s recommendations are in line with Iranian hardliners who wish to remain free to support organizations such as Hezbollah, the Lebanese group labeled as a terrorist organization by the U.S. and other countries.

FATF, in its June update, “welcomed Iran’s high-level political commitment to address its strategic AML/CTF deficiencies” and its efforts to seek technical assistance in implementing the country’s FATF Action Plan. But the FATF statement emphasized that even though the two-year deadline for the Action Plan had passed, major issues remained unaddressed.

“Since November 2017, Iran has established a cash declaration regime and introduced draft amendments to its AML and CFT laws,” the FATF statement read. “However, Iran’s action plan has expired with a majority of the action items remaining incomplete. Iran should fully address its remaining action items, including by: (1) adequately criminalizing terrorist financing, including by removing the exemption for designated groups ‘attempting to end foreign occupation, colonialism and racism’; (2) identifying and freezing terrorist assets in line with the relevant United Nations Security Council resolutions; (3) ensuring an adequate and enforceable customer due diligence regime; (4) ensuring the full independence of the Financial Intelligence Unit and requiring the submission of STRs for attempted transactions; (5) demonstrating how authorities are identifying and sanctioning unlicensed money/value transfer service providers; (6) ratifying and implementing the Palermo and TF Conventions and clarifying the capability to provide mutual legal assistance; (7) ensuring that financial institutions verify that wire transfers contain complete originator and beneficiary information; (8) establishing a broader range of penalties for violations of the ML offense; and (9) ensuring adequate legislation and procedures to provide for confiscation of property of corresponding value.”

Reuters reports that foreign businesses and investors have made it clear to Iran that compliance with FATF recommendations is crucial to creating a climate suitable for more foreign investment. Prior efforts to pass stronger AML/CTF requirements have failed in the face of hardline opposition grounded in policies that support and fund West-labeled terror organizations. Whether these new measures will gain enough traction to satisfy FATF by October of this year remains to be seen.

With AML Partners’ platform technology for RegTech, updating and upgrading your AML and eGRC software solutions is easier, faster, and much less expensive. Contact us today to explore how platform technology and our end-to-end AML Ecosystem SURETY Eco and the SURETY modules –powered by the RegTech Oneplatform–can transform the efficiency and effectiveness of your unique AML Compliance efforts. SURETY Eco includes fully integrated modules for CDD/KYC on-boarding, behavior/transaction monitoring, and sanctions screening. And AML Partners simplifies your end-to-end fully integrated AML Compliance efforts even further with an optional Subpoena Search module for FinCEN 314a and similar subpoena searches. Contact us today to learn more or schedule a demo of SURETY Eco, the AML Ecosystem powered by the RegTech One platform. With extraordinary configurability and built for API extensibility, the RegTech One platform powers not only an end-to-end AML ecosystem but also CECL workflows, vendor management, cyber risk workflows, FCPA workflows, and so much more. 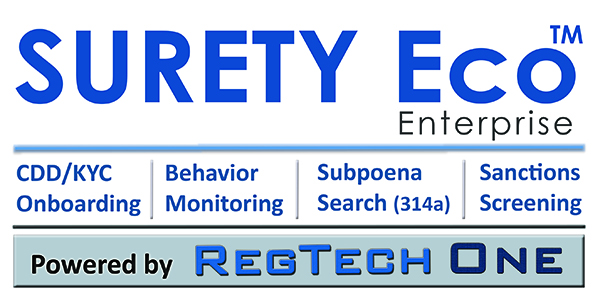